The best way to experience the web, email, photos, and video. Hands down. All of the built-in apps on iPad were designed from the ground up to take advantage of the large Multi-Touch screen and advanced capabilities of iPad. And they work in any orientation. So you can do things with these apps that you can’t do on any other device. A large, high-resolution LED-backlit IPS display. An incredibly responsive Multi-Touch screen. And an amazingly powerful Apple-designed chip. All in a design that’s

The Android vs Apple battle has officially made its way into the world of tablets. 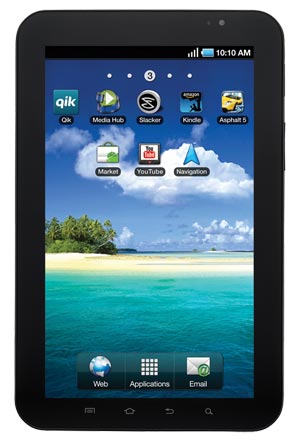 Samsung took the wraps off its new Samsung Galaxy Tab Android tablet on Thursday. The Galaxy Tab is a 7-inch slate built to complete with the current tablet king, Apple’s thus-far-unchallenged iPad.

Sure, there have been a couple other Android tablets on the market already (see Streak, Dell), but the Galaxy Tab is the first that truly qualifies as a contender.

So how exactly does Samsung‘s Galaxy Tab differ from the iPad? Check out this comparison chart for a side-by-side glimpse at the two devices’ specs and see for yourself. (Click image to zoom.)

In a nutshell, the Galaxy Tab is smaller and lighter (though rumors suggest a couple of larger editions will debut before the year’s end). It has the same speed processor but twice the RAM. Like the iPad, the Galaxy Tab comes with different options for internal storage. It also, however, supports up to 32GB of expandable storage; Apple’s device is limited to the internal space only.

The Galaxy Tab has two cameras — a rear-facing 3.2-megapixel camera and a front-facing 1.3-megapixel camera for video chatting — while the current models of the iPad have none. Samsung claims up to 7 hours of video playback for the Galaxy Tab; Apple says its iPad can last up to 10 hours. 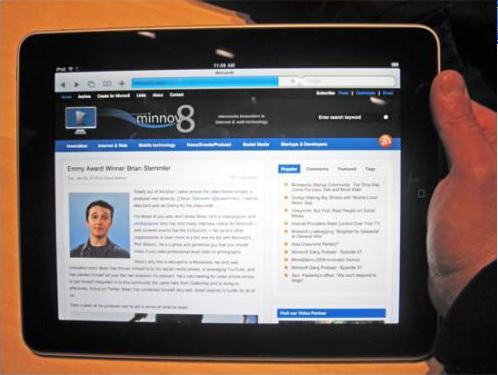 In terms of software, the Galaxy Tab‘s Android 2.2 operating system gives the device a number of selling points Apple’s iPad can’t claim, including full-featured multitasking, support for Adobe Flash, and unrestricted access to applications (Apple is notorious for censoring all sorts of material — ranging from political satire to swimsuit-clad women — and also for banning apps that provide functions such as free tethering and customization of the operating system).

Samsung’s Galaxy Tab is set to launch in Europe within the next few weeks, then in the U.S. shortly thereafter. Pricing and carrier information for the States is not yet available, though rumors suggest the Galaxy Tab could end up on Verizon.