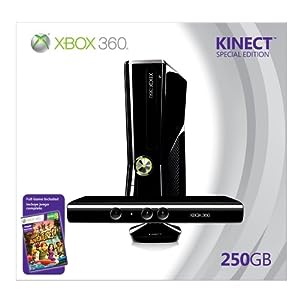 The Special Edition Xbox 360 250GB Console with Kinect. Kinect brings games and entertainment to life in extraordinary new ways-no controller required. Easy to use and instantly fun, Kinect gets everyone off the couch moving, laughing, and cheering. See a ball? Kick it. Control an HD movie with the wave of a hand. Want to join a friend in the fun? Simply jump in. Wi-Fi is built-in for easier connection to the world of entertainment on Xbox LIVE, where HD movies and TV stream in an instant. Xbox 360 is more games, entertainment, and fun.